Educating Myself – Gettin’ My 52 On in Evanston

This is the thirty-second in a series of walking Cincinnati’s 52 neighborhoods to find what makes each relevant to me. Follow me on Instagram for a hint of where I’ll venture next.

I walked Evanston because I could easily drive to XU. XU had been the site of my son’s first love affair with college basketball. A young neighbor of ours in Loveland had volunteered as XU’s ball boy, and after Davis’ father died, lots of neighbors pitched in to take Davis to games I didn’t have the heart to go.

I started my walk in the southwest corner of Evanston along Victory Parkway. Passing by the Walnut Hills cemetery, I was alarmed by the number of of graveyards I had “frequented” in the past three neighborhoods. Luckily, I had been walking at dawn! I passed the former Hoffman school. Later, I would walk around its backside and learn more. 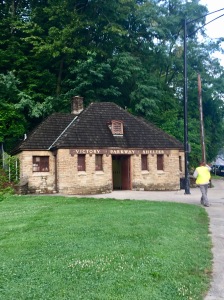 I tread along the long winding greenway of Victory Parkway, with a quick exit to Walnut Hills High School. I had honestly never been to Walnut hills, not for a day, until one of my new neighbors in OTR asked me to pick up her daughter. It was an impressive campus. I would have loved access to a school like that, but without the pressure.

Crossing Dana, I hit the boundaries of Xavier. There was nothing I hated more, hated, than a sidewalk that ended along university property, but alas, it did.

Then the walkway began again along the backside of the campus where the operations department operated.

However constrained Xavier was by their surroundings, the school was attempting to create more green, green space around the campus.

Despite the killer heat, I moved on. Walking Dana, I contemplated how long I really wanted to endure that day. I had, in my sight, a pedestrian bridge over I-71. I had always noticed the bridge from the highway, but never knew where it originated from or led.

So, I moseyed towards the Red Cross Center,  located near the site of a former pool. It was now a recreation area supported by the Bengals through their Hometown Huddle efforts. I would love to see more support by those athletes who make millions. Our recreation centers and pools needed sustainable funds. Every summer, the city always tried to play catch up.

After getting caught in the tangle of security gates around the Red Cross Center, I did find the origin of the pedestrian bridge and followed it like a rainbow.

Traffic that morning snarled. One of these days, I planned to stand near a city center highway exit with a sign that read, “If you lived here, you’d still be sleeping.”

On the other side of I-71, Evanston’s homes were charming. Smaller homes led towards the backside of East Walnut Hills. A mix of historic and well-maintained home ran along Fairfax Avenue as I marched back towards where I thought I left my car. 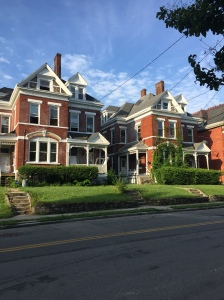 I soon realized I had cut off a portion of the neighborhood and circled back around Hackberry near several cemeteries. Calvary Cemetery and the Jewish Cemetery. Again, the cemeteries.

One observation I made as of late. Many neighborhoods did not have “for sale” signs in yards. So, I assumed homes were either under auction, in a land bank or moving fast in some of the inner-ring neighborhoods.

An older couple sat on their front porch as I slowly ended my walk. I loved front porches, and had they asked me to sit, I would have jumped at the chance to plop down and join in.

“Hey girl,” the woman called out.

“You gonna beat that heat today?”

“Trying.”  I was nearing the end of my walk, so I was clipped on my conversation.

“You gotta take me with you next time?”

Her question made me pause and laugh. Sometimes, the walks had felt like a chore. In particular as I trudged through searing heat or blinding rain.

I wish I had accumulated names of the many faces I had met or chatted with. But on another level, I loved the aspect of possibly meeting again, of me possibly treading on these same walks. 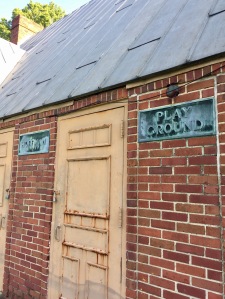 I turned down Woodward and came upon a baseball field where I experienced a not so deja vu. When Davis played baseball, he had coach who had developed a relationship with other coaches with teams nearer to the city center. I knew that field. Hoffman Field. There is no way for me to explain its familiarity other than the orientation of the field and the street conspired to bring back fond memories. As it happened, the field was undergoing repair, in preparation for a big weekend in Evanston.

In two days time, I would read more about the good work in Evanston, around Hoffman park and playground, including a zip line at the Evanston Recreation Center.  It’s a good thing I hadn’t known more then. I might have stayed there to play all day.

Evanston called themselves The Educating Community. They too were getting on the bandwagon of mottos for who they wanted to be, how they wanted outsiders to experience their community. With XU, Walnut Hills, Academy of World Languages, Alliance Academy and 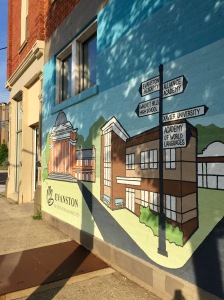 Evanston Academy, the moniker was hard to argue.

In 1893, Evanston was incorporated and named after the suburb in Chicago. As an eventual bedroom community, their tax base was faltering and therefore annexation by the city was attractive. In the 1950’s the neighborhood was divided into the black side and white side. According to the community council website, when a black preacher moved to the white side, the community turned as whole and become 95% African American.

And when the interstate cut through the business center, that action effectively removed all remaining aspects of Evanston’s business district.

Currently, the community was implementing a ten-year plan (2013-2023), which I applaud and they probably got some support from a few education neighbors who were very good at urban planning. 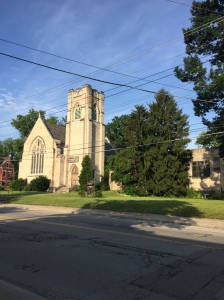 In the past, I had considered Evanston one of those nondescript neighborhoods. But the surrounds came to life via my footsteps, my interactions and news of the playground. It was no longer comprised of just sidewalks that ended in the shadows of the university. It was community that shone on it own. 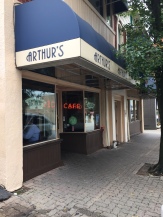 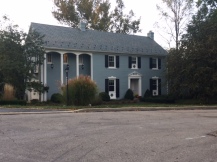 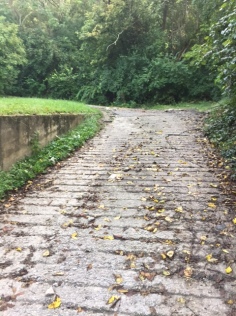 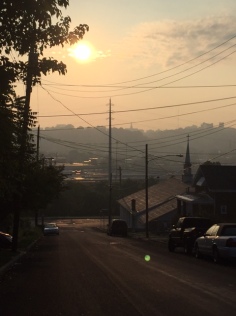 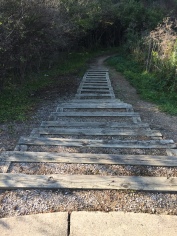 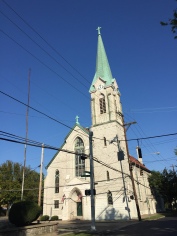 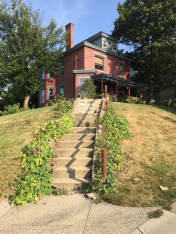 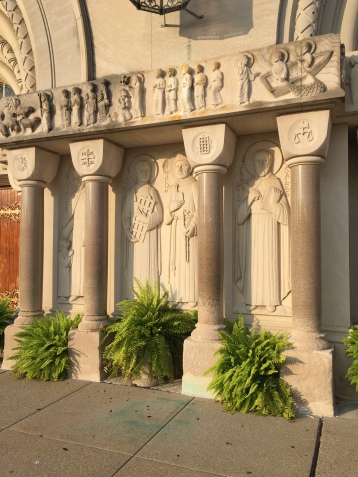 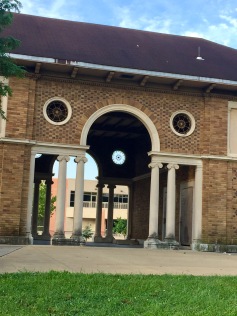 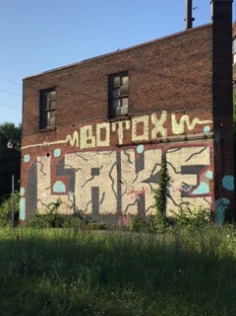 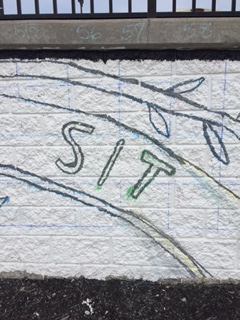 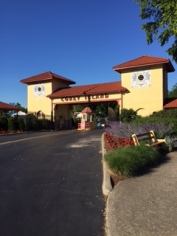 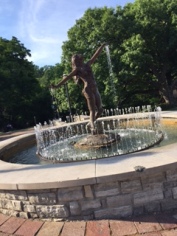 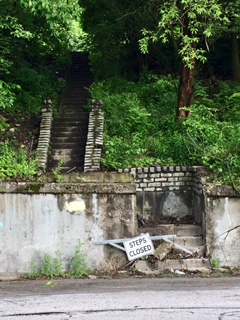 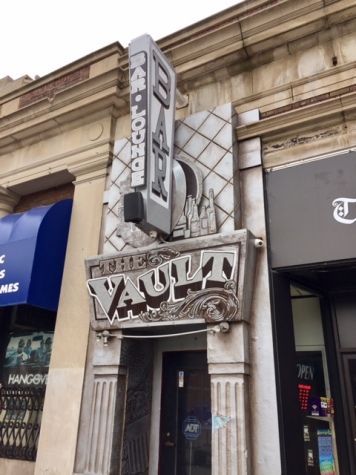 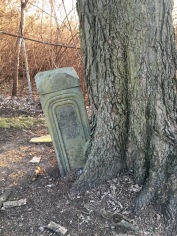 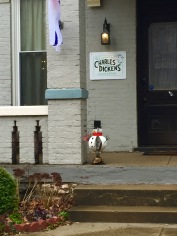 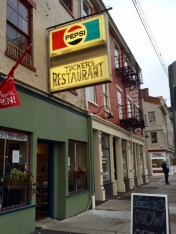